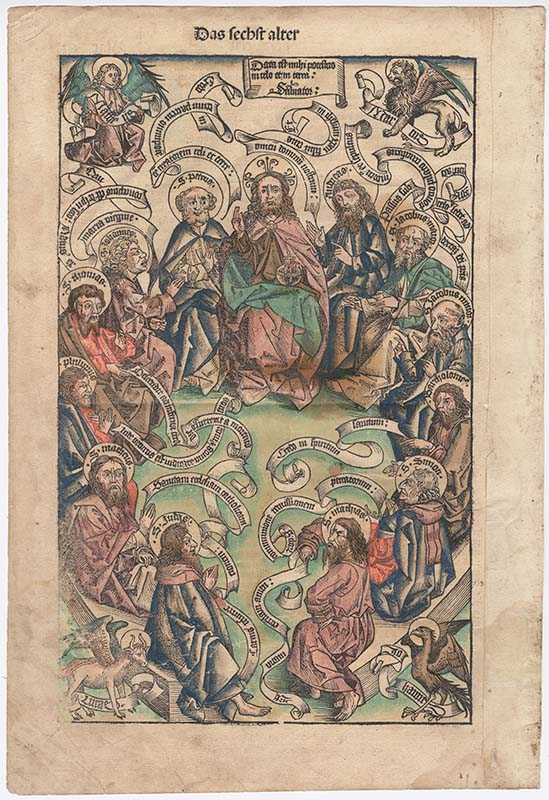 Did you know that historical engravings and woodcuts allowed for creative license? Colors were often added after book production by their owners to enhance images. Find 15th and 16th century examples from Pitts’ collections at the new 30 Day Display for July!

This woodcut depicting Christ enthroned, surrounded by the apostles, originally appeared in the Nuremberg Chronicle. The Chronicle is a renowned encyclopedia printed in Nuremberg in 1493 by Anton Koberger (c. 1440-1513), which recounts known human history at the time and is illustrated by hundreds of woodcuts, including Biblical scenes, maps of cities, and mythological creatures. The text of the work was originally written in Latin by Hartmann Schedel (1440-1514), and the book was quickly translated into German by Georg Alt (1450-1510) in an edition printed the same year by Koberger. Woodcut images from the Chronicle were often colored by hand by artists or the owners of the book, as has this particular woodcut, which appeared in the German edition of the Chronicle.

This colorized woodcut was designed by the German artist Hans Schäufelein (c. 1480-1540). Schäufelein was an assistant to the famed artist Albrecht Dürer (1471-1528), and his work resembles the woodcuts of the master. This particular image, depicting the scourging of Christ, was originally part of a devotional work Speculum passionis Domini Nostri Ihesu Christi, published by Ulrich Pinder (d. 1519) though it has since been separated from the book (Pitts owns a copy- 1507 PIND). A prior owner has colored the image by hand.

Drop by Level 2 of the library to see colorized woodcuts from two different artists of the 15th and 16th centuries, and try your own hand at enhancing images (but please not in the library collection itself)! Purchase a Pitts’ Digital Image Archive Coloring Book at the Circulation Desk!