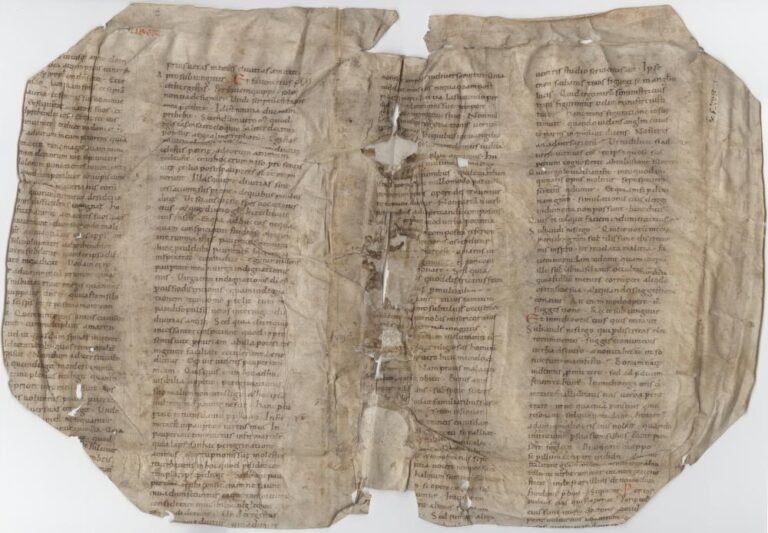 The collections of Pitts Theology Library include many manuscripts from the Middle Ages. Some of these are full works that have survived intact, but many are single leaves, which were separated from a larger work at some point in the past. Manuscript leaves often survived by being incorporated into the bindings of later works. On display here are two examples of this practice, drawn from Pitts’ Special Collections. 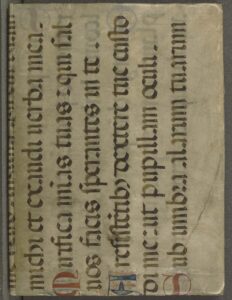 In this book, printed in France in 1517, the Christian humanist and Hebraist Johannes Reuchlin examines the principles of Cabala, an esoteric Jewish philosophy and system of biblical interpretation, in defense of Christianity. This particular copy of the work has been bound in a medieval parchment manuscript leaf from the Latin (Vulgate) Bible. The cover shows a portion of Psalm 16 with illuminated initial letters. 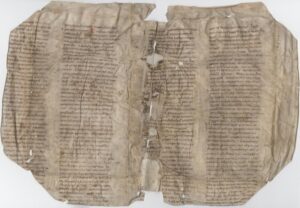 This manuscript leaf comes from a copy of Gregory the Great’s highly influential commentary on the book of Job. It is written in a rotunda script and dates from the early part of the High Middle  Ages, likely the 12th century. It is clear from the folds in the parchment that the leaf survived as part of the binding of another book, which was later deconstructed. The passage in this leaf is from the end of book 33, which explores the speeches of Elihu in chapter 32 of Job. Gregory advocated for a threefold exegetical method to biblical texts, including the literal sense, the tropological (or moral) sense, and the allegorical sense.

Stop by the main level of the library to see these incredible items in person! Is there something you’d like to see featured in the 30 Day Display from Pitts’ Rare Books & Archives? Contact Pitts at pitts.emory.edu/ask!