Each year, Pitts Theology Library purchases a book or manuscript item to honor the contributions that retiring faculty members have made to the Candler School of Theology community. The acquisition of these materials are intentional and relate to the faculty member’s area of scholarship. 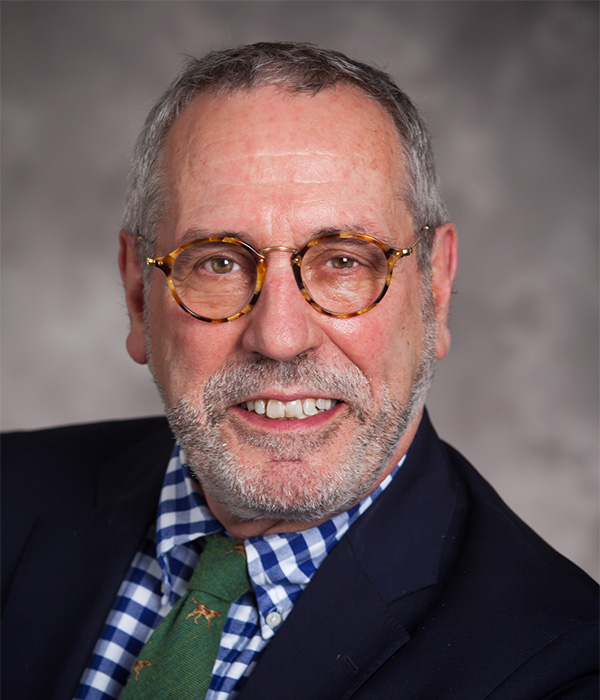 Pitts Theology Library first joins the entire Emory University community in celebrating the career of Dr. David Pacini, who retires this year as Professor of Historical and Philosophical Theology. Not only has Professor Pacini shaped the minds, careers, and lives of countless Emory and Candler students, but he has been among the strongest supporters (and users!) of Pitts, its growing collections, and its instructional mission. As a colleague and friend to longtime Pitts directors Channing Jeschke and Pat Graham, Dr. Pacini has long advocated for the budgets, the staff, and the rare book collections of Pitts, most notably its Richard C. Kessler Reformation Collection. To honor Professor Pacini for his impact on our community and our library, Pitts has made one of the most significant additions to the Kessler Collection in several years. In Professor Pacini’s honor, Pitts has acquired a nearly complete set of Augustin Hirschvogel’s etchings from the “Concordantzen alt und news Testament” (Wien Eigidius Adler, 1550). 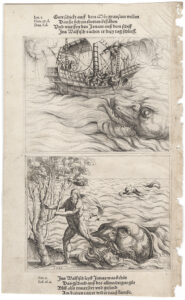 Augustin Hirschvogel (1503-1553) is the most well-known of a prominent German family of artists from Nuremberg. He was trained as a stained-glass painter in the workshop of his father, but when his hometown accepted the Reformation, the workshop lost its commissions to create stained glass for churches. As a result, Hirschvogel diversified his artistic technique. After moving to Vienna in 1544, he designed maps, views of the city, and fortification plans. It is during the last decade of his life that he created the landscape and copper Biblical etchings for which is he most renowned. His illustrations of the Old and New Testament accompany verses composed by Hungarian Peter Perényi (1502–48), and they were published as a single work in 1550. Art historian Jane S. Peters notes, “Hirschvogel took advantage of the freedom allowed by the etching needle to create wiry lines, knots, and curlicues, a style encouraged by his analogous activity of etching lines through the paint layers of his stained glass.” The Hirschvogel Biblical etchings are quite rare, and the new Pitts collection of 92 etchings, 88 from the original folio edition, is now amongst the largest documented collections of Hirschvogel’s works. 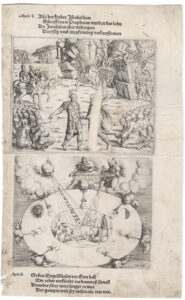 All those who have learned from Dr. Pacini, including students in his classrooms, attendees at his public lectures, faculty colleagues, and readers of his scholarship, will acknowledge that visual art has been central to his teaching and research. Following his mentors of the past, giants like Kant, Lessing, and Wittgenstein, Dr. Pacini has used the aesthetic to bring meaning to challenging theological concepts. The opportunity to add this significant collection of images interpreting Scripture to the Richard C. Kessler Collection, which Dr. Pacini has so strongly supported, seems an appropriate way to mark the storied career of this supreme teacher. It is our hope that this collection of beautiful images will serve as a fitting tribute to the man, his teaching, and his impeccable taste, and it will continue Dr. Pacini’s legacy of helping students expand their understanding of the Biblical text and theological tradition. 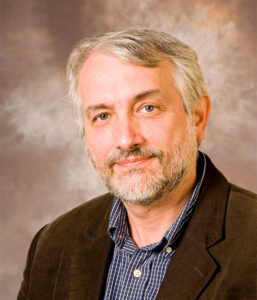 Pitts Theology Library offers congratulations and thanks to Professor Philip Reynolds, who retires this Spring as the Charles Howard Candler Professor of Medieval Christianity and the Aquinas Professor of Historical Theology. In honor of Professor Reynolds’ remarkable career at Candler and Emory and his steadfast support for Pitts’ instructional mission, the library has acquired a landmark work in medieval theology. Recently Pitts acquired and named in Professor Reynolds’ honor a 1487 printing of the fourth book of Peter Lombard’s Sentences. This work has been central to Dr. Reynolds’ teaching and writing career, notably in his acclaimed magnum opus How Marriage Became One of the Sacraments (Cambridge, 2016), a book for which he awarded the 2109 Haskins Medal by the Medieval Academy of America. 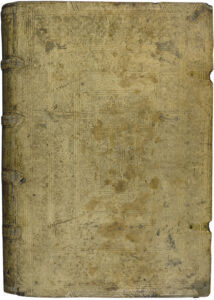 Peter Lombard (ca. 1100-1160) was a scholastic theologian and Bishop of Paris. His masterpiece, the Sententiarum libri quatuor, likely written in the latter half of the 1150s, became the standard textbook of late medieval theology. As Professor Reynolds writes, “His Sentences established the agenda for theological studies until the sixteenth century.” The fourth book of this 4-book work focuses on the Sacraments and the Four Last Things, including his treatises on marriage. Reynolds writes, “the Lombard harvested and compiled the results of an extraordinary vibrant and creative period in sacramental theology, collecting and sorting his material on marriage in his usual manner, which was pedestrian but practical, serviceable, and astute: a marvelous tabulation of current thought.” The Pitts acquisition is an edition printed by Nicolaus Kesler in Basel in 1487. This was the first printing of Lombard’s Sentences to include the Conclusiones Super IV Libros Sententiarum by Henry of Gorkum (1378-1431), a Dutch Thomist and professor the University of Köln. The Conclusiones are a set of commentaries on Lombard’s work, organized as a series of short summaries of Lombard. Henry’s work was popular in the 15th and 16th centuries, and it was printed both as a standalone work and (as is the case here) as a companion to Lombard’s Sentences. 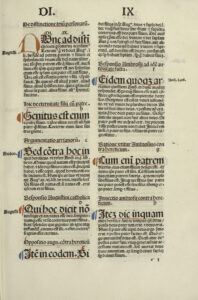 The folio volume is printed in Gothic type in double columns, and there are red and blue initial letters to mark the opening of sections, including a beautiful 8-line blue initial with red penwork, and continuous rubrication throughout the work. The volume is bound in contemporary Westphalian blind-tooled brown pigskin over wooden boards. Pitts is excited to add this volume to its incunabula collection, a term used to refer to books printed in Europe before the year 1501, the “infancy” period of moveable type printing in Europe. These rare works are the focus of ongoing research and exhibitions at Pitts, and this acquisition takes the total number of incunables at Pitts over 110. We hope that this new acquisition, which will bear Prof. Reynolds’ name in its catalog record, is a worthy recognition of a remarkable career, and we look forward to supporting new generations of students as they learn from two masters, Lombard and Reynolds.

Find all descriptions of acquisitions honoring retiring faculty since 2018 at this link! On behalf of the library staff, we wish Dr. Pacini and Reynolds the best in their retirement.